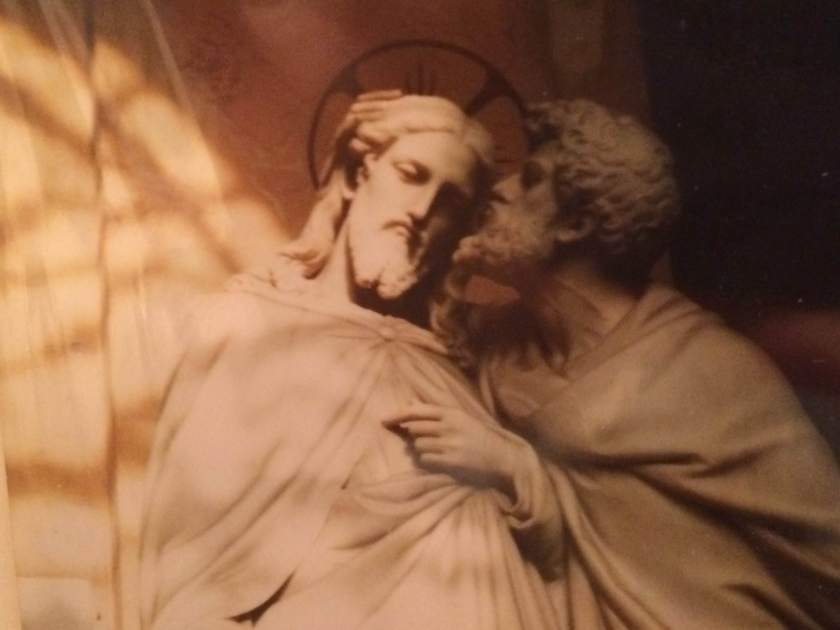 I’m not sure when I started feeling sorry for Judas.

Surely not as a child, when we’d boo and hiss at his betrayal in the colorful Bible storybooks. He hurt sweet Jesus, who always smiled and healed sick people. Judas was definitely the bad guy.

Not in high school, when my personal relationship with Jesus entailed memorizing bible verses, confessing my sins, and listing my concerns about other people’s sins. I would have been able to help Jesus see where Judas was headed.

In college, at the height of my legalism and perfectionism, I felt impatient about Judas. I didn’t want to discuss free will, God’s sovereignty, or any nuances. He was a selfish double agent, going after wealth and his own version of justice. It was unfortunate he hung himself, but it made sense.

During that time I did a seven-week intensive study program in Greece, Israel, Egypt, and Italy on the archeology, history, topography, geography, and artistry of the Bible. Even though we sang sweet worship songs on the island of Patmos, shores of Galilee, and Mount of Olives, I primarily used the trip to arm myself with more damning knowledge about the authority of God and the bible.

The last week of the program I encountered the Bacio di Giuda (Kiss of Judas) by Ignazio Jacometti in Rome. The way Judas pulls Jesus toward him for a kiss. It was unsettling.

I knew it was about me, but I didn’t know how.

I marched on toward adulthood, pulling Jesus toward me to hear my plans and opinions, backed up by proof texts, and the confidence of a black and white thinker. I was often lonely and anxious.

Somehow I captured the heart of a generous, loving man who forgave well and often. His freedom and grace was confusing and appealing. When he made a poor choice and confessed it to me, I didn’t forgive well. I brought up the offense many times. My lack of grace hurt his soul.

I had so many rules about how life should go and how people should act. I would approach Jesus and pull his face toward mine, like an intimate friend. But my goals were different from his. My plans were fueled by exhausted judgment, and liberally sprinkled with the rewarding perks a true believer surely earned. I knew I was bad at loving, but I couldn’t figure out why. I wondered when/if I’d get divorced, and if I did have kids, what I would do if/when they went to jail or came out. I told Jesus how I’d like him to handle that.

In that darkness I received the severe mercy of therapy. I went to counseling for nine years. I faced my deepest pain and confessed my darkest secrets. I unknotted nature-nurture questions in my past and general worldview. I had more healed places than broken places, but I had to acknowledge there was evil in my heart. Who put that there? I was very angry with God. I marched up to him and pulled his face toward mine. Jesus knew it was an ambush. He didn’t flinch. It was unsettling.

I dragged him to trial in the courtroom of my mind and demanded he explain the rules behind his loosey-goosey love. I read him long lists of the ways he offended me and let me down. Jesus didn’t defend himself. He waited.

I asked a woman at church to pray for me. I was so angry and tired. She asked what I wanted, and I cried, “I just want a blessing.” I wept for an hour with her sitting next to me. I realized that I didn’t think Jesus liked me, even after years of striving to be Teacher’s Pet. Instead of yanking his head toward me this time, I crumpled down at his feet, hungry for love. I wept repentance for my stubborn, selfish ways. I wept sorrow for years of unnecessary distance. I wept gratefulness because it wasn’t too late.

We don’t know why Judas chose to betray Jesus, and then kill himself. I hate it. I want the Prodigal Son story, where he turns around, drags himself home, and his father runs to meet him. I want Judas on that beach with Peter, confessing his love for Jesus three times. I want to see his repentance, restoration, and renewal. But it was too late.

Early in the morning, all the chief priests and the elders of the people made their plans how to have Jesus executed. So they bound him, led him away and handed him over to Pilate the governor.

When Judas, who had betrayed him, saw that Jesus was condemned, he was seized with remorse and returned the thirty pieces of silver to the chief priests and the elders.

“I have sinned,” he said, “for I have betrayed innocent blood.”

“What is that to us?” they replied. “That’s your responsibility.”

So Judas threw the money into the temple and left. Then he went away and hanged himself. – Matthew 27:1-5