God talks to me.

We have a big conversation every year between Christmas and New Year’s. It’s not like tea with the Queen where I’m in a new dress with notes on index cards. It’s more like a pitiful bedside chat with a doctor when I smell bad and feel like I’m dying.

Chris and I met friends at a little Mexican place. It was delicious. I went crazy with exotic drinks, appetizers and beef tacos. I haven’t had beef tacos since. And I don’t think Chris has either. In the middle of the night he overheard my body removing the beef tacos both ways and stepped into the bathroom assuming I was being murdered. I was weeping and retching and begged him to leave the bathroom if we were ever going to have sex again.

He later helped me back into bed. He showed me the bucket and path of towels next to the bed and ran out of the room to wash his hands and sleep on the couch.

I was given a lot of space the next day. I woke up to find water and ginger beer on the nightstand and the bedroom door firmly shut. I read and slept until late afternoon. I thought about the past year, my Fallow Field year. It started with a dream telling me to choose between living on 75% less or dying in one year. I laid back into the pillows and prayed, “Thank you, God, for this Fallow Field year. I learned so much. What do you want 2015 to be about?”

I honestly expected to hear nothing. But the words swooped down, “2015: THE YEAR OF LIVING DANGEROUSLY!!” It sounded like it was coming from a children’s acting coach, all eager smiles and bug eyes.

I replied, out loud, in spite of myself, “I’m not going to move.”

But I’m a dutiful girl, so I got out my prayer journal and wrote “2015-The Year of Living Dangerously.  What does that mean, God?  That really scares me.” And I closed the journal and picked up another book to read.

On New Year’s Day we had our Bacon Breakfast, voted on our Family Compassion Focus, and chose our words for the year. My word:

That raised some eyebrows. “Mom, why is Danger your word for the year?” I said, “I’m not sure. But I think I’m afraid of a lot of things, and maybe learning new things about Danger will make me less afraid? I don’t know.” My word was different than the other words on the table. 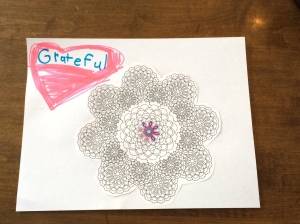 Chris took me out for dinner a few nights later so we could talk about our personal goals for the year. We hadn’t done that before. No agenda, just a safe place to hear each other. We talked about kids, this blog, exercise, money and compassion. I talked about how freaked out I was by “2015:  THE YEAR OF LIVING DANGEROUSLY.” (Chris told me that was the title of a bad Mel Gibson movie, but didn’t have other insights).

We talked about his awful job, and how this finally had to be the year he found a new one. I told Chris that I already told God, “I’m not going to move” and we chuckled at how ridiculous it would be to move our fragile, anxious family away from the rich resources of our hometown.

I really didn’t see it at the time, the kindness of God. He tried to warn me. Like the Department of Transportation putting up yellow signs for falling rocks and hairpin turns. God would keep trying to explain Danger to me before hinting at Surrender.  I had a lot to learn.

I will be unfolding this story and the idea of Surrender throughout the month of October.

To read more about our shared spiritual journey and questions, you can read here:  Soul.

Another short notice orchestra concert. This girl keeps things interesting. 💙
I ended up staying on the treadmill for an hour and 20 minutes because I could not stop watching this documentary. One Child Nation is deeply thought-provoking. Messy scenarios and questions about scarcity, power, propaganda, family, government, fear, and culture. . Some images, scenes, and stories were so horrifying I found myself urgently whispering “no! no! no!” The facts, numbers, and consequences are staggering. But very important to know and wrestle with. . One thing I learned was how China’s lucrative international adoption machine involved unfathomable extortion, kidnapping, and trauma on all sides. . I was captivated by Nanfu Wang’s unflinching, but never bullying, interviews - including very difficult ones with her own mom, aunt, uncle, and grandfather. . I’m going to be thinking about why and how humans choose what they choose for a long time. I’m not surprised this won Sundance’s 2019 Grand Jury Prize. I strongly recommend it. . (Note - I won’t encourage my kids to watch this yet. The stories and images of forced inductions, sterilizations, ‘medical waste,” terror, and abandonment were far worse than the dystopian novels they read.)
Winter Edition of Franklin Middle’s Newspaper. In it is G’s “Facts that will make you doubt everything part 2.” The facts she chooses and the way she delivers them are gold. Facts, Coke, Facts, London cabbies, Random, Butter, Facts, Murderous Unicorns, Trivia, Religious Freedom, Mic Drop about “Colmbus.” Love this kid. 😆⭐️
Winter is my favorite
Yikes. Lord have mercy on us.
Is it broken? This finger was smashed in a car door yesterday. She is hurting. Asked me to pop it so the stuff inside will come out. I cannot do that. Should we go to urgent care?