Everyone at the crowded table was laughing. My cousins could hardly breathe. Their friends were throwing their heads back and clapping. I was beaming, almost standing on my chair, gesturing wildly, telling them all about what happened when a squirrel snuck into my sleeping bag at summer camp.

But it wasn’t true.

I had lived in fear of finding a squirrel in my sleeping bag at camp. I obsessed over it all week: imagining all the places he would accidentally bite me, how his fluffy tail would feel on my mud-caked legs, and how his chittering family members would cheer from the rafters. Would I scream and run, or freeze and slowly be nibbled to death? Would the pretty counselor come to my aid, or the mean one? What would my seven bunkmates do?

I still worried about a squirrel attack when I got home, ripping back my sheets at night before bed. Then very alert and awake in the dark, I imagined all best and worst case squirrel sleeping bag scenarios. In time, that fear morphed into an epic, outlandish tale, perfect for middle school bragging rights.

I was so in zone that night at my cousins’ with that story. I glowed in the cloud of laughter and approval. Until my cousin’s friend wiped her eyes and breathlessly asked, “Oh my gosh, is that story true?”

The June 2017 National Geographic cover story is ”Why We Lie: The science behind our complicated relationship with the truth.” When I pulled the magazine out of our mailbox, the first thing I thought of was my Squirrel in the Sleeping Bag story. Why did I lie that day? Why did it feel good? Why did I keep telling tall tales after that, for years?

“We all lie, but not all lies are the same.

People lie and tell the truth to achieve a goal:

What was my goal? And why did I think honesty wouldn’t work?

Like every kid, I wanted as many people as possible to like me. That was my goal. Adults liked me because I was a good student, polite, and consistent. I had friends that liked me, but I always thought I needed more. Figuring out how to keep everyone liking me like work.

But taking a true story about my own life and adjusting it for laughs was so easy. Holding court at recess, a sleepover, or family dinner I easily changed words, tones, emotions, and endings of my stories based on the body language of those listening. It was absolutely my favorite thing to do.

“Lying is so easy compared to other ways of gaining power,” observes Sissela Bok, an ethicist at Harvard (p. 38).

Telling stories about homework and the dog wouldn’t work because they were boring. People would lose interest and focus on someone else. I needed their attention and approval. More than anything I wanted to hear, “Tell another story! You are hilarious! Your stories are the best!” That’s the power I wanted.

But when I was alone, I worried. What version of what story did I tell to which people? Who knew about when I was asked to sing “on broadway?” What about when I fell through the ice and was “almost paralyzed?” Was the shark on TV, a fin in the distance, or “right under my boogie board?”

In the National Geographic story writer Yudhiji Bhattacharjee highlights scandalous liars we all know: Richard Nixon, Bill Clinton, Lance Armstrong, Bernie Madoff, and PT Barnum. He included those who lie for a living: CIA agents, poker players, magicians, and art forgers. I looked at all their glossy pictures and wondered, could that have been me?

As a girl I sometimes wondered if I was becoming a con artist, like I saw on TV. I began to steal gum from the Jewel-Osco after reading the novel Pinballs because I wanted to practice shoplifting so I could take care of my sister if we suddenly became orphans. I read The Hiding Place and learned that in order to hide Jews in World War II you had to be a very good liar. Maybe lying was okay sometimes.

Living in a church-going home I knew the 10 Commandments and that lying was a sin. But I didn’t think my lying was really a sin. My stories were just embellishments, exaggerations. I wasn’t lying to get food for orphans or save lives, but I was making people happy. So, no big deal.

When I look at this chart, I see that most of my childhood lying was “to promote myself.” I never got any money from my stories, but it did bring me friendship and acceptance (15% of people lie for personal advantage), it did help me see myself as likable and fun (8% lie for self-impression), and I definitely made people laugh (5% lie for humor).

I was totally in denial about how often I lied to protect myself. I definitely didn’t want to get in trouble (22% of people lie to cover up a mistake or misdeed). I wanted to get away with teasing my sister and gossiping in the hall. I wanted the kid next to me to get in trouble for talking in class, not me. These protecting lies were efficient and effective for keeping me out of trouble, but after a while I started to not like myself, because I was being unkind. So I had to tell more stories, to get others smiling and laughing, so I could feel good again.

I told stories for a long time. Even after I chose to become a Christian and pursued a spiritual life. The stories I told God about myself when I was praying were unintended exaggerations, because I thought I was the worst sinner ever when I was 17. The stories I told my Christian friends were true, but the emotional intensity was magnified, because that showed how I really really felt in spite of the ordinary thing that happened.

I didn’t come to understand the concept of grace until my mid-twenties, and with that, my tall tales started shrinking. Somehow being loved just as I was, by my husband and God, filled those hungry places for approval. Sometimes when a night was really dragging I’d be tempted to spin a yarn, but it didn’t give me the thrill it once did. I confessed my exaggerations when I prayed, until the habit eventually lost its grip.

I started to wonder if people even believed my stories when I was younger. I admitted and apologized to some old friends for my amplified stories, but no one seemed to care, or be surprised. I think they just truly enjoyed being told good stories.

The crazy adult world of bosses, commuting, landlords, and in-laws soon revealed that the truth is indeed stranger than fiction. The facts were entertaining enough and kept us all laughing.

Then I had children. There is nothing more gross, ridiculous, and absurd than parenting. I didn’t have to embellish anything. The poop really did stink that bad and really did explode onto all those surfaces. I really only slept two hours. My daughter really did keep sticking beads up her nose on purpose.

Before I had kids I wondered if my relatives and friends were just awful parents, because their kids lied all the time. I laughed at their big eyes, wagging heads, chubby pointing fingers, and other obvious tells. I heard about the fastballs they caught and the dragons they pet. That was cute. But now when my own children lie about hand-washing, homework, and contraband candy I want to pull my hair out. 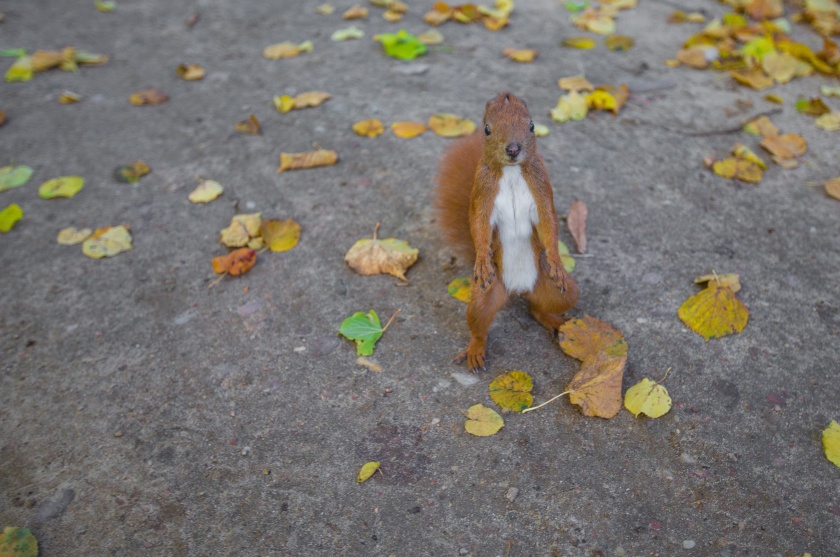 But Bhattacharjee states that all kids are liars, if they are smart.

He points out, “like learning to walk and talk, lying is something of a developmental milestone….a reassuring sign that their cognitive growth is on track” (p. 38).

Improving as a liar is also positive sign, Bhattacharjee explains: “What drives this increase in lying sophistication is the development of a child’s ability to put himself or herself in someone else’s shoes” (p. 42).  This is an interesting spin. One of my highest goals as a parent is to teach my children empathy and compassion. So maybe the next time my son lies in my face I can study the situation and leverage his sophisticated skills for future good instead of deception?

This is a hopeful spin on an addictive vice. It also helps me be gracious and forgiving to my childhood self. I feared for a long time that I was some sort of bad seed because lying came so easily for young, tall-tale-telling me. But I wasn’t malicious. I was just a normal kid with a smart, developing brain, looking for love and laughs. Maybe that ultimately helped me understand people? Maybe it helped me become a writer? Maybe God’s grace is redeeming all that impulsive imagination for good?

In celebration of this transformed understanding of my past I’m going to finally tell my kids “The Squirrel in the Sleeping Bag” story this weekend. I can’t wait.

1. What’s the biggest lie you ever told? Did you get away with it?

2. Using the National Geographic chart above (and below), what category of lying was it? Were you protecting or promoting yourself? Were you hurting or helping someone else?

3. What’s the craziest lie someone tried to tell you?

4. When are you tempted to lie now? When does it feel like being honest won’t help you reach your goal? How important is that goal to you this moment?

5. Do you need to ask a friend, parent, spouse, teacher, coach, partner, boss or employee to forgive you for lying to them?

6. Do you need to forgive someone for lying to you? 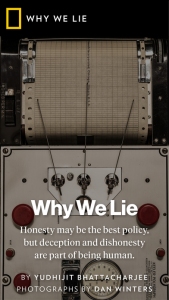 **Why We Lie Chart from ©National Geographic (from photo above)