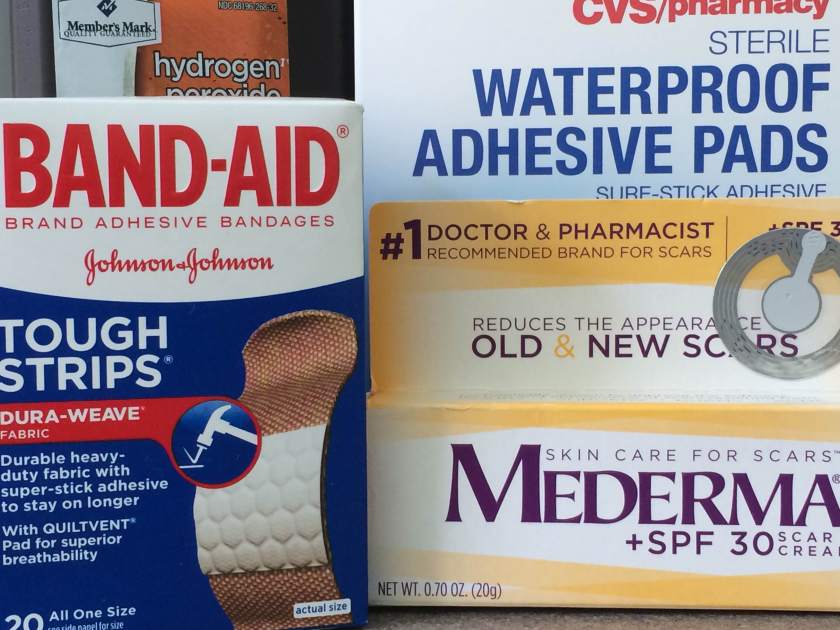 At eight years old I overheard a woman say an Arabian prince could only choose a woman with no scars to be his princess. I was devastated. I had scars from mosquito bites, chicken pox, bike accidents, and scraping my feet in Gramma’s big cement pool. I also had a belly button, and wondered if those princes were smart enough to realize that everyone had at least one scar. Did the holes from getting our ears pierced count?

I’m an almost albino redhead. I’ve had eight suspicious moles removed. The first one was near my right breast. I was 20, and the plastic surgeon named, I kid you not, Dr. Scarzella, said he didn’t want to do the surgery because the scar might hinder intimacy with my partner. I was not even close to being sexually active, but I somehow had enough sense of self to say, “well, I don’t think I’m going to be intimate with any guy who couldn’t handle a scar on my boob.” He laughed and patted my shoulder. I had a moment of feminist pride, but I was thinking of that prince. I was definitely out of the running now.

I remembered a steamy movie scene where two lovers explored each other’s bodies, naked and unashamed. They told the stories of their scars, which were then gently touched and tenderly kissed. It was like their pain was revealed and redeemed.

Pre-cancerous mole removal is not the stuff of love scenes.

My old scars have faded. They’re like the inside of conch shells, smooth and pink with a bit of shine. No pigment, freckles or soft down. Just the plain fact that pain happened right there. My other scars are angry, raised and dark, straight lines on curves. They demand attention, questions.

At an annual skin check my dermatologist said, “You don’t scar well. They’re too big and raised. Your body makes too much scar tissue.”

I thought about that for a long time. I am also the girl who went to counseling for nine years. It seems I can’t forget my pain.

I studied the metaphor my body offered to me. I learned that when our skin is opened our bodies send platelets and fibrin to knit a covering for our wounds, called a scab. Under that custom-made tent new skin will form, starting at the edges, then the middle, until the whole area is made new. The scab will slough off when it’s no longer needed. If the cut is deeper, our bodies will send more material to fill in the gaps. It will send lots of collagen and proteins to build a strong, protective scar.

Scabs and scars are signs of healing.

When we’re rejected and forgotten it feels raw, like those open places when our skin bleeds. We sometimes press our hands over our hearts when we talk about it, feeling the pain. Our friends and counselors sit, listen, pray for us, and hold us tight. They cover over that hole like a medic’s tent. They are scabs. Protecting us while God rebuilds us inside.

Our scars are our stories. I think God wants to use them to show off. Scars are like stones of remembrance, saying God was here and He helped me. We suffered deeply. He sent us platelets and fibrin, prayer and friends. He fixed us up. We healed. I was down but not out. Blind but now I see.

During Lent people focus on how human Jesus was. He was tempted. He was misunderstood, betrayed, and forsaken. He was beat up, tortured, and killed. Jesus had a soft body and soft heart in a jagged world, too. His scabs and scars became the story of our salvation.

I have more scars than I can count now. That Middle Eastern prince I heard about as a girl would be disgusted.

But there’s another prince. He’s into scars. He’s also from the middle east. One of his nicknames is Prince of Peace. When I showed him my big collection of scars he looked at me so tenderly, and listened to my stories. Then he showed me his, and whispered a love story into my heart. He chose me. He healed me. And I have great stories to tell.

He personally carried our sins in his body on the cross

so that we can be dead to sin and live for what is right.

More thoughts about Scabs and Scars:

“But for you who fear my name,

the Sun of Righteousness will rise

with healing in his wings.

And you will go free,

leaping with joy like calves let out to pasture.” – Malachi 4:2