I was bullied mercilessly as a kid. It started in 3rd grade, when I suddenly didn’t understand the fast multiplication in blue pen on the overhead projector. I got moved from smart math to regular math. My bully taunted, “Ha! You thought you were smart and you’re NOT! You are STUPID.” I walked through the halls with my head down.

On the bus my bully would point and laugh when I moved my book bag over for a neighbor to sit down and she’d walk past ignoring me. “You have NO FRIENDS! You are LAME!” she shouted. I would sink in my seat, cross my arms, and try not to cry.

We moved away after 6th grade. My new school in California was totally different. I was offered drugs on the bus and jr highers were having sex under the trailers instead of going to class. It didn’t take long for a bully to find me. “You don’t smoke POT?! You’re such a goody goody. NERD! LOSER!” I don’t think a boy talked to me once and my new bully pounced on that, too. “You are FLAT! You are UGLY! You’ll NEVER have a boyfriend.” Every day I was silent.

We moved again in time for me to start high school in a new state. I was still flat, had bad skin, and wasn’t interested in partying. I found great friends, and after reading my mom’s bible one night, found Jesus by reading the Psalms. But a bully found me eventually. In the locker room she saw my training bras and showed her friends. She would ask who I was going to the next dance with, when she knew I wasn’t going. Ever. I was “UGLY. FLAT. DISGUSTING. Who would ever go out with YOU?” I never wanted to commit suicide, but I thought I understood why people did. 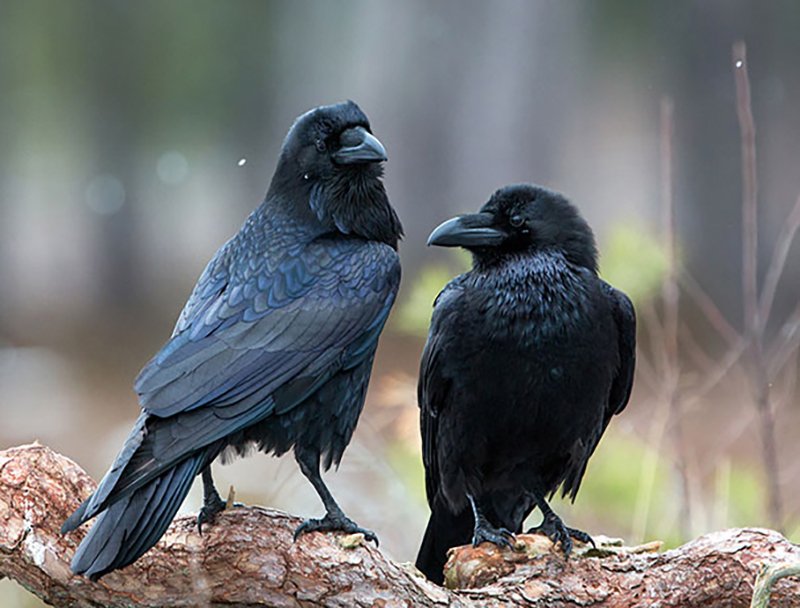 I wish I could say things got better in college. They got much worse. I went to a small, prestigious Christian college and was bullied constantly. My appearance hadn’t improved. My love life hadn’t improved. But those things weren’t even targeted. Christians can be vicious, “You are FULL OF PRIDE! Why aren’t you more LOVING? Your sarcasm is SIN. Do you really think God is pleased with YOU?” I hung on to my faith by a fraying thread and was grateful when college was over.

Juvenile Crows Arguing on a Rooftop – by Trileigh Tucker

All that was a long time ago. Here’s what I’m dealing with now:

My husband’s not verbally abusing me. My neighbors aren’t leaving nasty notes in the mailbox. Mean moms aren’t pointing at me in the parking lot. I’m alone when I hear these taunts. I always have been.

The smart kids didn’t laugh me out of class. I was just deeply ashamed of not being good at math anymore. No one ever laughed and pointed in the locker room. I just loathed my own body. There wasn’t a witch hunt in college. I just struggled to fit in with shiny, happy Christians.

I thought everyone felt this way until I started counseling. I learned that it’s right to feel bad when we do something wrong, that’s Guilt. We ask forgiveness, make amends, learn from it and move on. Guilt is a Teacher. But Shame is an Abuser. It kicks you when you’re down and says YOU ARE BAD AND YOU DESERVE IT. It doesn’t say we made a poor choice, it laughs and spits YOU ARE UNLOVABLE AND UNWORTHY.

We can learn lots of self-talk and re-framing to loosen Shame’s grip. We can learn to be kind and see ourselves with soft eyes. But Shame is pretty strong and wily. It mocks me even when I’m not doing self-care right. And that’s why I need Jesus.

I can’t get away from Shame without Jesus. Sometimes, Jesus is like the cop that walks in while I’m getting beat up and carries my limp body to the ambulance. Or he’s like the Aunt Jemima who hugs me close to her bosom after swatting a teasing sibling with her towel. Or a guard dog in front of my tent so I can sleep.

Jesus says, “I love you. All the time. Every day. Every minute. No matter what. I promise.” Shame says that is a load of crap and smashes my picture of Jesus in the heart frame on the nightstand to pieces. But Shame is a Liar.

There is a section of the Bible, John 8, that holds my heart.

“Jesus returned to the Mount of Olives, but early the next morning he was back again at the Temple. A crowd soon gathered, and he sat down and taught them. As he was speaking, the teachers of religious law and the Pharisees brought a woman who had been caught in the act of adultery. They put her in front of the crowd.

“Teacher,” they said to Jesus, “this woman was caught in the act of adultery.  The law of Moses says to stone her. What do you say?”

When the accusers heard this, they slipped away one by one, beginning with the oldest, until only Jesus was left in the middle of the crowd with the woman. Then Jesus stood up again and said to the woman, “Where are your accusers? Didn’t even one of them condemn you?”

And Jesus said, “Neither do I. Go and sin no more.”

Jesus, the Protector and Defender, continues to argue with self-righteous, vicious, judgmental religious leaders for the rest of the passage. He ends up calling them liars and compares them to Satan:

“He was a murderer from the beginning. He has always hated the truth, because there is no truth in him. When he lies, it is consistent with his character; for he is a liar and the father of lies.“

Satan is a Liar. Shame is a Liar. So when I swallow all the lies Shame pours out and take all the beatings, it’s like I’m agreeing. With Satan. Like I’m working for him. That can’t be good.

A few years ago I was having a bad week. My husband was traveling, I had yelled at my kids, my back was out, and my jeans didn’t fit. I was a BIG FAT MEAN MOM. I scrubbed hardened yogurt off the counter and felt Shame enter the room. I pictured two crows perched on my china cabinet, cocking their heads, and cawing out my Shame. Their talons curled and eyes fixed. I literally shook.

I’ve always been terrified of crows.

Then – I really did this – I stomped my foot and waved the paper towel in my hand and shouted “Get out of here! I belong to Jesus!” They cawed and rose and ruffled and then settled again. I smacked the counter and shouted again, “In the name of Jesus, who loves me, get the hell away from me!”

I pictured them gone, sitting outside my closed kitchen window. I gave them the stink eye. I prayed while I finished cleaning the kitchen, “Jesus. I need you.” As the day went on I pictured them sitting on the far back fence.

By dinner they flew away.

I began to unfold the idea of Surrender throughout October 2015.

For similar stories, you can read about my fun adventures with Crows,  Worry, Anxiety, Sin, Feeling Fat, Drinking, and Love.

For more about our shared spiritual journey and questions, you can read here:  Soul